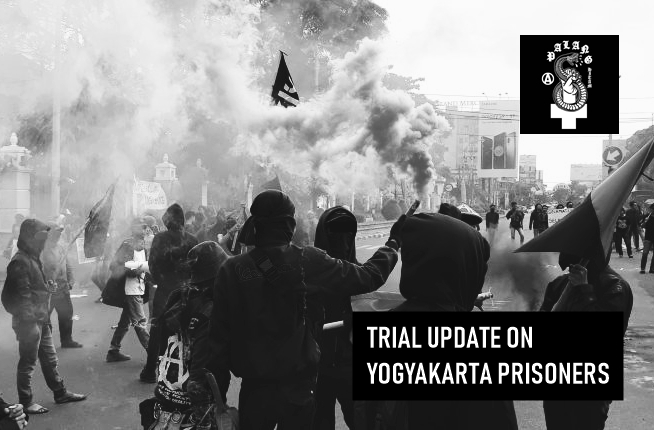 The following is a text by comrades in so-called Indonesia, and provides an update and timeline on the status of anarchist prisoners in Yogyakarta.

2018/11/09 Updates on Yogyakarta prisoners.
Information update from the Prisoners in Yogyakarta as of now, they are as well as can be expected. Even though comrade BV is experiencing shortness of breath, and now it’s beginning to get better.
The trial process is very long, especially for comrade BV, AM, and W. Those whose the trials already happened on 8.11.18 have already proceeded to the trials of pleading (defendant’s defence), and before that they already receive the demands from the Public Prosecutor with a maximum penalty of 10 months at their trial on 1.11.18 at the Sleman District Court. At the moment they are being retained at Cebongan Prison, Sleman awaiting the following trial process with the agenda for the verdict to be handed down on 22.11.18.
We will keep updating information for you with further developments.
TILL ALL ARE FREE

Today, Monday 15 October 2018 the hearing was held for the MCs with testimonies from BV and AM.
The progress of the trial will soon be returned to us.
Nothing is free until everything is free!

2018/10/05 Trial update on Yogyakarta prisoners
We need to explain, that we have difficulty finding information regarding detainees due to separate case files and also different the trial schedules between them and the schedules change of the trial day, but this did not stop us from giving information to you (readers).
Since October 6, 2018, we have been striving to get the latest information regarding the Class War Prisoners in Yogyakarta who were related to the M1 incident that happened in the past at the intersection of UIN Yogyakarta, from those 11 prisoners they have all received legal assistance ( Advocate), with the following details:

Here we only explain in general that some prisoners have received prisoners’ decisions, prisoner demands, and are still in the process of witnesses from the Public Prosecutor, as for, those of you who want to know the information in each trial of each individual (the prisoners) you can access via the internet (https://pn-sleman.go.id) according to the case file you want.

HI, COMRADE, WE ARE WAITING FOR U TO BE FREE TO JOIN TOGETHER AND BREATHE FRESH AIR!
Read more at: https://palanghitam.noblogs.org