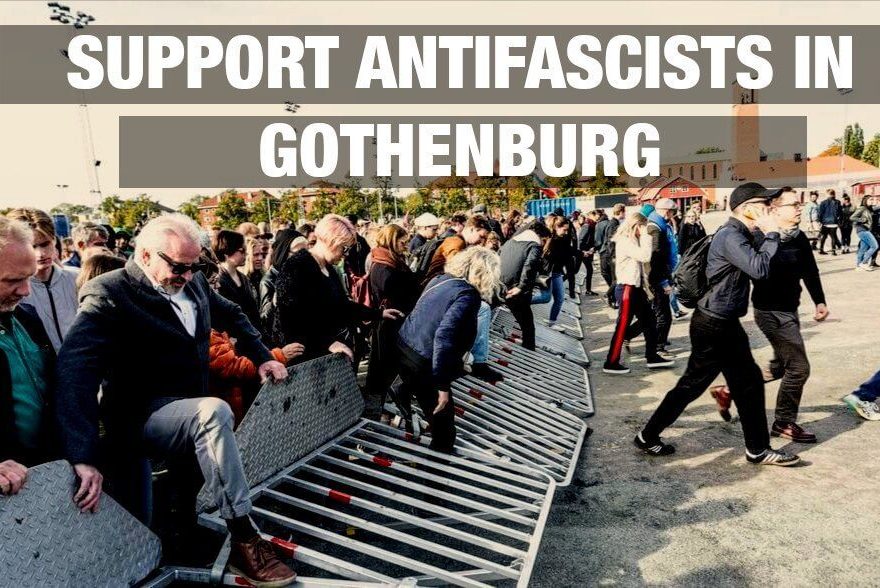 This text along with the related Firefund can also be found at https://www.firefund.net/gothenburgafa

For a few years Gothenburg was one of the focal points of neo-nazi activity in Sweden. The bombings of a leftist book cafe and two refugee camps in 2016 were followed by a period of intense pursuits at establishing the so called Nordic Resistance Movement (NRM) on the streets of our city. The NRM is a violent pro-Hitler sect consisting of racist maniacs threatening, attacking and in some cases even killing its opponents. No one in their right mind wants them around.

Their efforts reached its climax with the attempt to arrange a big nazi march in the autumn of 2017. But they underestimated the collective rage and resistance of everyday people. Almost 20,000 people claimed the streets, stepped over public order fences or took some part in blocking every chance for the march to succeed. Since then, their presence is limited to night time actions and short visits to nearby towns. We halted the establishment of a local nazi movement, but it has not stopped.

In 2018 a group of nazis, some belonging to the NRM, tried to break into a syndicalist may day-celebration. They were efficiently stopped by people in the demonstration, and one of our comrades is now awaiting trial for an alleged assault.

In 2019 the NRM held a demonstration on the first of may in our neighbouring town Kungälv, hoping every left leaning antifascist would be busy. But thousands of people, local and traveling from Gothenburg, made their day a miserable failure. They have since announced they will not come back to Kungälv this year. At least one comrade from Gothenburg is however awaiting trial for allegedly resisting the police, and more accusations may likely come following what was described as a riot.

With trials coming up, and assuming that the confrontations above will likely not be the last, we ask for your support. A series of support parties in Gothenburg have already begun, but knowing that the Swedish state is happy to set an example with antifascists, we suspect this will be expensive.

Every euro raised will be used to first pay for fines and second to cover the costs associated with prison sentences. Should there be money left over, it will be used to help cover similar cases in the future.