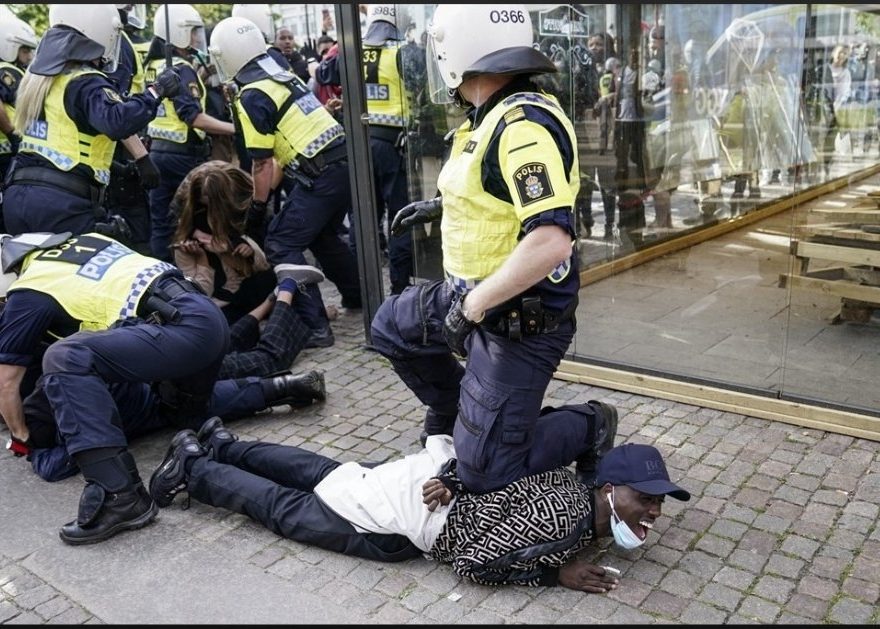 On June 7th 2020, there was a Black Lives Matter solidarity demo in Gothenburg Sweden, just as there had already been in Stockholm, Malmö, and a number of other Swedish cities. With regards to these manifestations of solidarity, a lot of people – some well meaning and some not – has questioned why people living in relatively equal countries in northern Europe feel the need to do this. Some have even gone as far as to suggest that this was just another vain leftist attempt at identity politics, and that the people attending these demos were just virtue signalling. Of course everyone had their own reason for going, but this is our take.

Further, while the violent systematic repression of black people in the US is of course exceptional, the notion that racist police violence only exists in the US is ridiculous. It exists in all nation states, as a natural consequence of what nation states are; e.g. a way to segregate people. This automatically makes people who are not considered “citizens” worth less with regards to rights, protection, etc., in the eyes of the state. And obviously, this notion of “us” and “them” creeps into society as a whole, resulting in discrimination against perceived “non-citizens” in the job and housing markets, and more, which subsequently leads to geographical segregation and poverty.

And since the police – the state’s enforcers – are responsible for hunting down “illegals”, removing beggars, and so on, they will always be suspicious of anyone who doesn’t look like an “ethnic citizen”, and use this as an excuse to abuse and harass them. So even if someone is legally a citizen, if they don’t have the right ethnicity, or live in the wrong neighborhood, or doesn’t dress according to the norm, they are still more likely to be subjected to police violence, simply due to the notion that they are in the eyes of the police part of “them”.

So when we took to the streets on June 7th, as well as any other day, we did it out of solidarity with the Black Lives Matter movement in the US, but also for all of those suffering from violent police repression in our own backyard. Because where there is police, there is police brutality.

Until all are free!