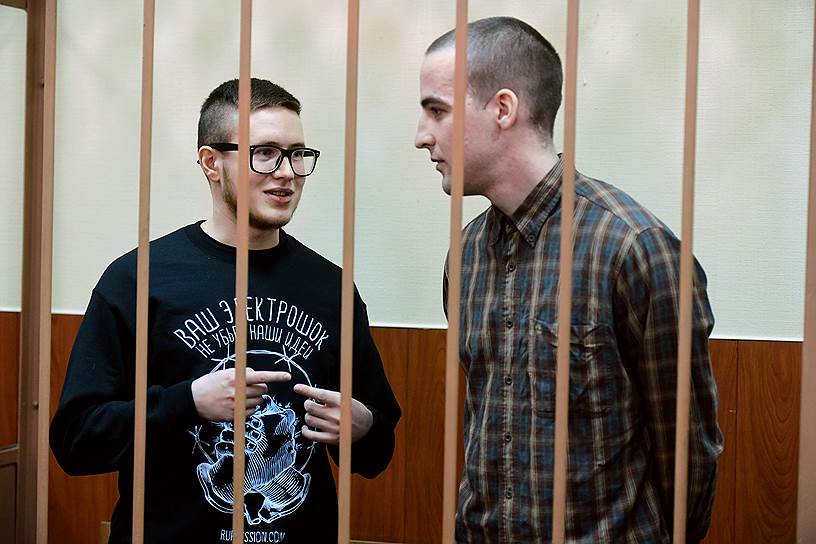 The following is a text from kommersant.ru, translated by The Russian Reader.

The court trial in the case of the “anarchist terrorist community” Network got underway in St. Petersburg. Viktor Filinkov, a 24-year-old programmer, and Yuli Boyarshinov, a 27-year-old industrial climber, have been charged with involvement in Network. Federation Council member Lyudmila Narusova, who attended the hearing, pointed out the “ability to throw grenades,” which the prosecution included in the evidence against the defendants, was taught officially to members of the patriotic youth movement Yunarmiya.

“This case has nothing to do with the rule of law,” Narusova noted.

Filinkov and Boyarshinov’s case is being tried in St. Petersburg by the Moscow District Military Court. In January, the same court sentenced Igor Shishkin, who made a deal with case investigators, to three and a half years in prison. Subsequently, the FSB placed Network on the Russian federal list of banned organizations.

The courtroom could not accommodate everyone who wanted to attended the trial. Narusova and ex-State Duma member and civil rights activist Yuli Rybakov were in the gallery.

The defendants were applauded by the gallery as armed guards led them into the courtroom.

During the investigation, Filinkov and three young men in Penza also charged in the case publicly stated they had been tortured with electrical shocks. Boyarshinov claimed conditions in the remand prison were tantamount to torture. Both men have filed complaints with the
European Court of Human Rights (ECHR) in Strasbourg.

Lawyer Vitaly Cherkasov motioned the court to let his defendant, Filinkov, sit beside him during the hearing, rather than in the cage, since he had no criminal record or history of conflicts with the law.

The presence in the courtroom of riot police, regular police, and court bailiffs, as well as Cherkasov’s mention of international norms, how things were done at the EHCR, and Prime Minister Dmitry Medvedev’s order to his underlings to explore options for banning the use of the cage in Russian courtrooms made no impression on the court. Both defendants were kept in the cage for the entire hearing.

According to the indictment, the so-called anarchist terrorist community was established no later than May 2015 by Dmitry Pchelintsev (who was arrested in Penza) and an unidentified person. They recruited the seven defendants in the case who have been investigated by the FSB’s Penza office. After cementing the group, they are alleged to have “assigned roles among themselves and explored ways of committing crimes” in order to overthrow the regime. According to the prosecution, to accomplish this objective, they planned on establishing combat groups and recruiting individuals who shared their anarchist ideology.”

The FSB’s Petersburg office has claimed the defendants were among these recruits. Filinkov has been accused of volunteering to be the group’s “radioman,” while Boyarshinov was, allegedly, their “sapper.”

After the indictment had been read, Judge Roman Muranov asked the defendants whether they understood it.

The prosecution claims Filinkov promised to “familiarize himself with the community’s charter, employ a pseudonym, data encryption software, and conspiratorial methods, and acquire and improve [his] combat skills.”In addition, Filinkov was supposed to have “supplied members with communications devices,” taught them encryption, “recruited other individuals, discussed and planned crimes during meetings, attended classes on tactics, reconnaissance, sabotage, and combat, and the use of weapons and explosive devices, and acquired the knowledge necessary in extreme circumstances and combat conditions.”

“When the time came to shift to active operations for accomplishing the objective part of the crimes [sic],” Filinkov, allegedly, agreed to “mobilize and be ready to achieve the terrorist community’s objectives.”

“I don’t understand the source of these letters, nor how the indictment could be a fiction, rather than something emerging from the evidence,” said Filinkov.

After hearing similar charges made against him, Boyarshinkov said he admitted his guilt and was willing to testify before the examination of evidence.

After the hearing, MP Narusova said the incidents of combat training, as described in the indictment, had nothing to do with the law.

“The Yunarmiya officially engages in combat training under the patronage of Defense Minister Sergei Shoigu. Children are taught to throw grenades, and they learn combat tactics. Ask Shoigu why the entire Yunarmiya is busy learning combat skills?” Narusova wondered.

She referred to a recent statement by Federation Council member Viktor Bondarev, who had proposed reinstating basic combat training in Russian schools. He claimed to be outraged children did not know how to throw grenades and were afraid of machine guns.

Ms. Narusova said she was drafting a law bill that would criminalize torture. She also said planned to get to the bottom of the Network case.

“This case has nothing to do with the rule of law,” Narusova noted.

In their testimony, the defendants insisted they were learning the alleged skills as a matter of self-defense, given the numbers of antifascists murdered in different parts of Russia in recent years.

In particular, Filinkov mentioned the murders of Timur Kacharava, Stanislav Markelov, and Anastasia Baburova. He reported that, during his studies at Omsk University, he and his friends had been attacked by “right-wing radicals, neo-Nazis, and fascists,” including provocateurs who, he alleged, had ties with law enforcement agencies.

According to Filinkov, the assailants in these clashes had been armed with “blades and stun guns.”

After the investigation was completed, the headmaster of the school Filinkov attended submitted a glowing letter of recommendation. The letter claims the defendant had always shown respect for the law, and was friendly, conscientious, and responsible. He had been an excellent student and won a prize at an academic astronomy competition at Baikonur.

Kommersant will be following the trial’s progress.

What can you do to support the Penza and Petersburg antifascists and anarchists who have been tortured and imprisoned by the Russian Federal Security Service (FSB)?

Donate money to the Anarchist Black Cross via PayPal (abc-msk@riseup.net). Make sure to specify your donation is earmarked for “Rupression.”

Spread the word about the Network Case aka the Penza-Petersburg “terrorism” case. You can find more information about the case and in-depth articles translated into English on this website, rupression.com, and openDemocracyRussia.

Organize solidarity events where you live to raise money and publicize the plight of the tortured Penza and Petersburg antifascists. Go to the website It’s Going Down to find printable posters and flyers you can download. You can also read more about the case there.

If you have the time and means to design, produce, and sell solidarity merchandise, please write to rupression@protonmail.com.

Design a solidarity postcard that can be printed and used by others to send messages of support to the prisoners. Send your ideas to rupression@protonmail.com.

Write letters of support to the prisoners’ loved ones via rupression@protonmail.com.

Translate the articles and information at rupression.com and this website into languages other than Russian and English, and publish your translations on social media and your own websites and blogs.

If you know someone famous, ask them to record a solidarity video, write an op-ed piece for a mainstream newspaper or write letters to the prisoners.

If you know someone who is a print, internet, TV or radio journalist, encourage them to write an article or broadcast a report about the case.

Write to rupression@protonmail.com or the email listed on this website, and we will be happy to arrange interviews and provide additional information.

It is extremely important this case break into the mainstream media both in Russia and abroad. Despite their apparent brashness, the FSB and their ilk do not like publicity. The more publicity the case receives, the safer our comrades will be in remand prison from violence at the hands of prison stooges and torture at the hands of the FSB, and the more likely the Russian authorities will be to drop the case altogether or release the defendants for time served if the case ever does go to trial. Why? Because the case is a complete frame-up, based on testimony obtained under torture and mental duress. When the complaints filed by the accused reach the European Court of Human Rights in Strasbourg and are examined by actual judges, the Russian government will again be forced to pay heavy fines for its cruel mockery of justice.